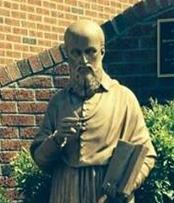 Liturgy
The public prayer of the Church.

Note: The following terms are listed in their sequence of the Mass.

Entrance Song/Music
The song/music which takes place during the entrance procession.

Veneration of the Altar
The revering of the altar with a kiss and the optional use of incense.

Greeting
The celebrant greets all pre-sent at the liturgy, expressing the presence of the Lord to the assembled community.

Penitential Rite
A general acknowledgment of sinfulness by the entire assembly, accompanied by requests for God’s mercy and forgiveness.

Gloria
Ancient hymn of praise in which the Church glorifies God. It is used on all Sundays (outside of Advent and Lent), and at solemn celebrations. The text originates from the Christmas narrative in the Gospel of Luke (Luke 2:14).

Opening Prayer
This prayer by the celebrant expresses the general theme of the celebration.

Liturgy of the Word
That section of the celebration where readings from the Scriptures are proclaimed and reflected upon. On Sundays and major feasts, there are three readings:

Between the first and second readings, a psalm is spoken or sung by the entire assembly. The response is repeated after each verse. If sung, a cantor or choir sings the verses of the psalm.

Alleluia Acclamation
This acclamation of praise to God follows the second reading and prepares the assembly for the Gospel.

Homily
The homily (sermon) is a reflection by the celebrant or other minister on the Scripture readings and on the application of the texts in the daily lives of the assembled community.

Profession of Faith
The assembly together recalls and proclaims the fundamental teachings of the Roman Catholic faith. The Profession of Faith, also referred to as the Creed, is used on all Sundays and Holy Days.

General Intercessions
Prayer of intercession for all of humankind; for the Church, civil authorities, those with various needs, for all peoples, and for the salvation of the world. The celebrant invites all to pray, another minister proclaims the prayers of petition and the assembly responds by asking God to hear and to grant their requests.

Liturgy of the Eucharist
The section of the celebration when the gifts of bread and wine are prepared and the Eucharistic Prayer is proclaimed by the celebrant, and the Blessed Sacrament is distributed to the assembly.

Blessed Sacrament
The Eucharist, the Body and Blood of Christ, whether at the Mass or reserved in a special place in the Church.

Preparation of the Gifts
The time in the Mass when the bread and wine to be used in the celebration are brought to the celebrant, usually by representatives of the faithful.

Offertory Song
Music used during the presentation of gifts to the celebrant and as the altar is prepared for the Liturgy of the Eucharist.

Incense
Incense (material used to produce a fragrant odor when burned) is used as a symbol of the Church’s offering; the rising smoke represents the prayers of the assembly rising to God.

Washing of Hands
An expression of the desire for inward purification. The celebrant washes his hands in symbolic cleansing to prepare himself just as the gifts have been prepared as an offering to the Lord.

Prayer Over the Gifts
The prayer by the celebrant asking that the gifts to be offered be made holy and acceptable in the eyes of the Lord.

Eucharistic Prayer
The prayer of thanksgiving and sanctification. It is the center and high point of the celebration. During the Eucharistic Prayer, the Church believes that the bread and wine become the Body and Blood of Jesus Christ.

Preface Dialogue
The introductory dialogue between the celebrant and assembly in which all are invited to join in prayer and thanksgiving to God. The Holy, Holy, Holy The response of the community to the preface and a continuation of the general theme of praise and thanks. Also called the Sanctus.

Consecration
The prayer and blessing during which the bread and wine become the Body and Blood of Jesus Christ.

Intercessions
A series of prayers for the Church, the world, the Pope, clergy and laity, and the dead. Final Doxology A final prayer of praise of God.

Amen
Also called the Great Amen. It is the acclamation by the people expressing their agreement with all that has been said and done in the Eucharistic prayer.

Lord ’s Prayer “Our Father…”
The prayer of petition for both daily food (which for Christians means also the Eucharistic bread) and the forgiveness of sins.

Doxology
The response of the people acclaiming the sovereignty of God.

Sign of Peace
Before sharing the Body of Christ the members of the assembly are invited to express their love and peace with one another.

Breaking of the Bread
The celebrant recreates gestures of Christ at the Last Supper when He broke the bread to give to His disciples. The action signifies that in communion the many are made one in the one Bread of Life which is Christ.

Lamb of God (“Agnus Dei ”)
An invocation during the breaking of the bread in which the assembly petitions God for mercy and peace.

Holy Communion
After saying a preparatory prayer, the celebrant (or other designated ministers) gives communion (the consecrated bread and wine) to himself and the other ministers at the altar, and then communion is distributed to the congregation.

Communion Song
The music that is used as the consecrated bread and wine – the Body and Blood of Christ – is distributed to the faithful.

Prayer After Communion
The final prayer by the celebrant in which he petitions that the Sacrament be beneficial for all.

Concluding Rite
The brief rite which consists of the celebrant’s greeting to all present, final blessing and dismissal; followed by a concluding song and concluding procession.